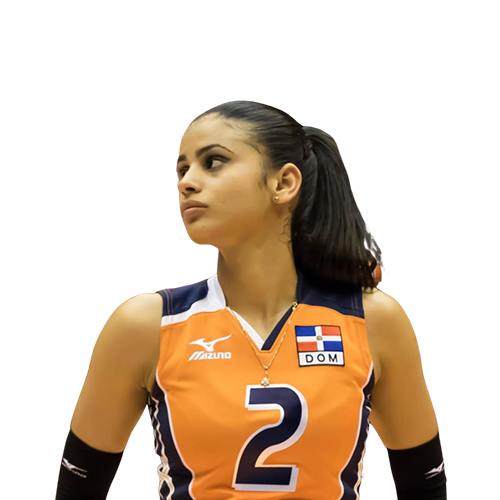 Winifer Fernandez is a Dominican professional volleyball player. Her hometown and birthplace is Santiago de los Caballeros, the second largest city in the Dominican Republic. She was born on 6th January 1995, which makes her age 25 at the time of writing. Her position is Libero and she has played for Santiago and Cienfuegos volleyball teams in the Dominican Republic, as well as spending two years playing for Telekom Baki and Rabita Baku in Azerbaijan. Fernandez was last registered as playing for Caribeñas New Horizons in 2018, where she was part of a title winning team.

Winifer Fernandez started playing volleyball as a child and relocated to Santo Domingo, the capital city of the Dominican Republic, in 2009 to become part of the junior national team setup. She started playing for Santiago and was then signed to the Cienfuegos roster, where she played for two years (2010-2011). Having won the NORCECA U18 continental championship Best Libero, Best Digger, and Best Receiver awards in 2010, she went on to win a bronze medal as part of the Dominican Republic national girls’ team in the Youth Pan-American Cup in 2011. In 2012, Fernandez was a focal point of the team’s Junior NORCECA Championship gold medal, where she again won the Best Libero, Digger, and Receiver awards, and was named the Most Valuable Player. She also won the 2012 U23 Pan-American Cup gold medal and was named Volleyball Player of the Year by the Santiago Province Guild of Sports Writers.

2012 was also the year when Winifer Fernandez made her debut for the Dominican Republic’s senior national team, playing in the 2012 FIVB World Grand Prix. The USA went on to win the tournament for the 5 th time, with Fernandez’s team finishing an eventual 12 th. From 2013-2015, Winifer Fernandez relocated to Azerbaijan and played for Telekom Baku and Rabita Baku, before returning to the Dominican Republic to play for Mirador in the 2015 FIVB Club World Championship. Unfortunately, Mirador lost both their matches and finished last, well behind eventual winners Eczacıbaşı VitrA. While club success was limited, though, Fernandez experienced great success with her national team, winning the 2016 Pan-American Cup and the 2017 Bolivarian Games. She also played for the Dominican Republic’s Under 23 side, losing in the FIVB U23 World Championship bronze medal match against Bulgaria.

Unfortunately for Winifer Fernandez, her early success came at a personal cost. In 2016, a viral YouTube video was published, and several Instagram and Twitter accounts posted pictures of her, some of which were fake. She was also listed as an Olympian, despite the Dominican Republic’s failure to qualify for the 2016 Olympic volleyball tournament. The media attention evidently took its toll on Fernandez, as very little is known about her career from 2018 onwards. She played for Caribeñas New Horizons and won the Dominican Women’s Volleyball Superior League. However, after 2018, she didn’t appear on the team’s roster, and suddenly stopped playing for the Dominican Republic national team. She is currently not accounted for at any professional volleyball team.

Considering her talent and the fact that she is still only 25, the question “Where is Winifer Fernandez now” is a hot topic in the volleyball world. Her national team – and her scores of fans around the world – will be hoping she surfaces again in time for the postponed 2021 Olympic Women’s Volleyball Tournament in Tokyo. This time, the Dominican Republic have qualified, and will play in a group with Japan, Serbia, Brazil, South Korea, and Kenya.