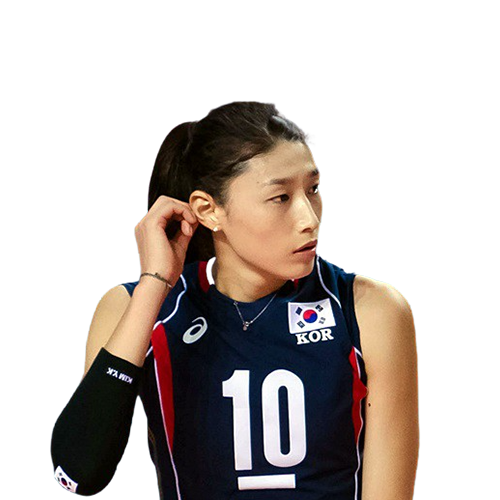 Yeon-Koung Kim (Kim Yeon-Koung) is a South Korean professional volleyball player and captain of the South Korean international women’s team. With 35 domestic medals and over 40 individual awards, both club and international, she is widely regarded as one of the best players in the world.

An outstanding player in high school, Kim Yeon-Koung actually began her professional volleyball career by being selected for the South Korean national team before she had played a single club game. She was a member of the squad for the 2005 World Grand Champions Cup at the age of 17. Her performances gained her immediate attention, and she was signed by Heungkuk Life (now Incheon Heungkuk Life Insurance Pink Spiders). This was the first season that the Korean V-League ran, and Heungkuk Life’s first season as a professional volleyball side. The team won the first two seasons of the V League, with Yeon-Koung winning the MVP award both years, as well as every individual player award, including Best New Face, in her first season as a pro. She also played in the 2006 FIVB Women’s World Championship, in which South Korea finished 13 th , and the 2007 Women’s World Cup.

Despite missing large chunks of both her first seasons for surgery on her knee, Kim Yeon-Koung went on to become the first player in the V League to record 2000 points, and she won her 3rd MVP title before signing to play for JT Marvelous in the Japanese V.Premier League for the 2009 – 10 season.

In both seasons with JT Marvelous, the side finished top of the end of year standings, finishing as runners-up in the playoffs in 2009, and champions in 2010. Kim was Best Scorer in 2009, and in
2010, she was Best Scorer and Best Spiker at the Asian Women’s Volleyball Cup, winning a bronze medal with South Korea. Later in the year, the team would also win the silver medal at the Asian Games, losing 3-2 to China in a tight final which they led by 2 sets to 0. For the 2011 year, Kim Yeon-Koung secured a big money move to Fenerbahce in Turkey, on a reported $800,000 a year. In her six years in Turkey, she would win 4 MVP awards and 12 individual awards in total as Fenerbahce went on to claim their first ever CEV Champions League title in 2011 – 12. The side would also win the CEV Cup a year later, as well as 2 domestic league titles, 2 Turkish Volleyball Cups and 1 Turkish Super Cup.

It was with the South Korean national team, however, that Yeon-Koung would experience perhaps the greatest success of her career. First, in 2012, she was best Scorer at the London Olympics, in which South Korea lost to Japan in the bronze medal match. Then, after the agonising defeat to China at the 2010 Asian Games, the team got their revenge, winning gold at the 2014 Asian Games in Incheon, South Korea. The team won the tournament without losing a single set throughout and claimed the silver medal at the Asian Cup in the same year, with Yeon-Koung winning the Best Opposite Spiker award.

Following a 5th place finish at the Rio de Janeiro Olympic games in 2016, and success in the 2016 – 17 Turkish Volleyball Cup, Kim Yeon-Koung moved to China to play for Shanghai Guohua Life (now Shanghai Bright Ubest Women’s Volleyball Club). The team finished top of the table during the season for the first time in 17 years, and Yeon-Koung was awarded Best Foreign Player.

Unfortunately, though, they fell short of the title, being beaten into second place in the playoffs. After just one season, she returned to Turkey, this time with Eczacibasi. There, she would win the Turkish Volleyball Cup and back-to-back Turkish Super Cups, as well as the runners-up medal in the 2019 FIVB Club World Championship. She was awarded Best Outside Spiker in the tournament and received the same award at the 2019 Asian Games – for the fourth time. South Korea finished third and in the same year, Kim-Yeon Koung was made the Eczacibasi captain for the 2019 – 20 season.

Kim Yeon-Koung runs a youth sports development club in South Korea and is involved with several charities. She has made guest appearances on a number of South Korean reality TV shows and serials. She has also published two children’s books.