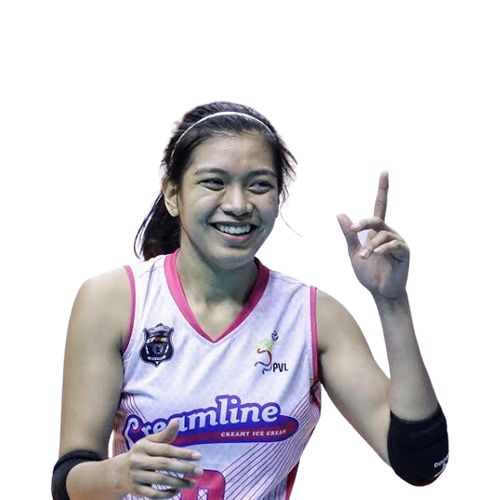 Alyssa Valdez is a Filipino volleyball player, who plays at Outside Hitter. Despite still only being 26, her career already spans nearly 10 years, as well as multiple countries and several appearances for the Filipino National Volleyball Team.

Alyssa Valdez started excelling at volleyball at a young age, and after playing at the Southern Tagalog Athletic Association sports meet, she was recruited by the University of Santo Tomas Junior High School, where she played for the UST Tigress Cubs, winning multiple high school tournaments.

Storming the UAAP with the Ateneo Lady Eagles

From here, she progressed to the Ateneo Lady Eagles, a collegiate side in Manila who play under the University Athletic Association of the Philippines. With Ateneo, she not only won titles, but multiple awards: Best Scorer (4 times), Best Server (3 times), Season MVP (3 times), and Finals MVP (once).

After finishing 4th with the Ateneo Lady Eagles in 2012, Valdez led the side to the 2012-2013 final, where they lost to the DLSU Lady Spikers. However, the season saw her not only land the Best Scorer award, but also break the all-time record for points in a single game, with 35.

In the 2013-14 season, Valdez entered the UAAP beach volleyball tournament and won the bronze medal with partners Bea Tan and Michelle Morente. She was also made captain of the indoor Lady Eagles side, which avenged their previous-year defeat to the DLSU Lady Spikers and were crowned champions. Meanwhile, Alyssa Valdez won Best Scorer, Best Server, Season MVP and the Finals MVP awards. She also set a new scoring record in the Shakey’s V-League Conference, with 342.

In the 2014-15 season, Alyssa Valdez and the Ateneo Lady Eagles represented the Philippines at the 2014 ASEAN University Games. The team won a bronze medal; the first international medal for a Filipino team in 9 years. Valdez top-scored in the bronze medal match, with 18 points. Meanwhile, in the UAAP season, the Lady Eagles defended their title against the DLSU Lady Spikers, with Alyssa Valdez winning the Season’s MVP, Best Server, and Best Scorer awards, and the team finishing with a perfect 16-0 record for the year. This would represent the high point of Valdez’s career with the Lady Eagles, as the following year, they lost in the final, although they did once again win the bronze medal at the 2016 ASEAN University Games.

In 2013, Alyssa Valdez played a few games for the Smart-Maynilad Net Spikers, although she missed the knockout games of the Shakey’s V-League because of the beach volleyball tournament. This was her first taste of the club game outside of a collegiate setting, in the V-League Open Conference, rather than the Collegiate Conference.

In 2015, Valdez joined the PLDT Ultra Fast Hitters, who won the V-League Open Conference, beating the Philippine Army Lady Troopers in the final. Valdez won the Best Outside Spiker and MVP awards to go with her three awards at collegiate level. In the following conference tournament, the team defended their title, with Valdez returning for the finals and scoring 25 points. Her performance secured her the Finals MVP award.

On Christmas Eve, 2016, Alyssa Valdez made the decision to move abroad to play, signing for Thai side 3BB Nakornnont, where she played for several months. Later, in September 2017, she Valdez also spent three months with Attack Line, a team in Chinese Taipei.

After spending a season abroad, Valdez returned to the Philippines to play in what had become the Premier Volleyball League, with Creamline Cool Smashers. She was made captain and promptly won the MVP award for the 4th time in her career, as well as the best outside spiker award. The team won both the Reinforced and Open Conferences in 2018, and the Open Conference in 2019.

Alyssa Valdez represented the Philippines in the 2014 FIVB Southeast Asian Zone Qualifier, but the team finished third in their group, thereby missing out on qualifying for the FIVB World Championships. Unfortunately, while Valdez has represented her country for many seasons, they have missed out on major championship qualifying and have failed to win any medals at Asian tournaments. Even at Under-23 level, when she captained the Philippines side in 2015, the side could only manage a 7th place finish. And with the Philippines not entering the 2019 Asian Women’s Volleyball Championship, thus missing out on the opportunity to qualify for the Tokyo Olympics (to be held in 2021), Valdez’s international future remains uncertain, despite her success at club level.

and her relationship with Filipino professional basketball player Kiefer Ravena has seen them referred to as a “power couple” in their native country. They appeared together on reality TV show “Phenoms” in 2016.

Alyssa Valdez and Kiefer Ravena have been involved in a number of charitable initiatives recently, including raffling off her shoes to raise money for health workers in the Philippines, and setting up a training facility for aspiring young athletes, called Phenom Elite Training Academy. The initiative is aimed at stimulating the growth of sports in the city of Bacolod, in part by bringing in coaching from the capital city, Manila.

Instagram is the go-to for most volleyball followers, Alyssa Valdez’s Twitter – @AlyssaValdez2 – has nearly 2 million followers and she is the most followed volleyball player in the world on both platforms, putting more prestigious players to shame. Her following is indicative of her status amongst fans in the Philippines and were it not for the popularity of Thai legends Nootsara Tomkom and Piyanut Pannoy she would be the most popular volleyball player in the world.